Throughout the years of change and challenge, Associated Electric has never lost focus of the reason it was formed: to provide an economical and reliable power supply and support services to its members. This historical timeline shows development of Associated Electric:

Once upon a time, electric service was a luxury enjoyed only in cities, where the concentration of people was high enough to make it economical. Meanwhile, in sparsely populated rural areas where electrification wasn't profitable, people were left in the dark -- and left behind.

Finally, the federal government realized that if rural America were ever to be electrified, the country as a whole would have to lend a helping hand. So in 1935, Franklin Delano Roosevelt signed an executive order creating the Rural Electrification Administration. A year later Congress gave the agency the money and power needed to promote rural electrification by providing low-cost loans to build transmission and generation facilities.

Rural cooperatives formed rapidly to take advantage of the favorable financing. Farm by farm, village by village, the lights went on across rural Missouri and rural America. And as electrical needs grew, the REA continued to provide low-cost financing. Eventually, Associated's major generation facilities, built primarily during the 1960s and 1970s, were financed with help from the REA.

The electrification of rural America often is described as the single most dramatic event to touch the daily lives of this country's farming families. It helped make this nation's agriculture industry the most productive in the world and enabled the rural economy to grow in even more unexpected ways.

As late as 1961, the year Associated was formed, a large majority of its electric consumers were involved in farming. Today, about 10 percent claim to receive their principal income from agriculture. Meanwhile, business and industrial customers have grown to more than 30 percent of member energy sales, although they make up only 8 percent of cooperative members.

In 1935, 6.4 percent of the farms in Missouri had electricity – more than many other states in the mid-South. Yet, more than 90 percent of farms in France, Germany, Holland and Switzerland were electrified during the same period. Rural Americans simply didn't have the economic clout to obtain the one commodity that, more than anything else, could increase production and improve the quality of their lives – electricity.

The 1960s - Associated Electric formed to supply power to members

The 1960s was a decade of birth, establishment and growth for Associated Electric as it strove to meet the need for which it was created.

It obtained success early. In 1964, Associated Electric President John Buck said its first full year of operation “shows that through Associated the rural electric cooperatives of Missouri now have an abundant supply of low-cost wholesale electricity. In 1961, not so long ago, this was not true.”

1962, March 28 - During a ceremony in Springfield, draft contracts between the soon-to-be Associated Electric and three western Missouri investor-owned utilities are signed.

1962, May 28 - Neil L. Adams is hired as Associated Electric’s first general manager (serving in that position until June 1971).

1962, August 1 - After approval from the REA and the Department of the Interior, Associated Electric officially begins operations.

1968 - Associated Electric, the city of New Madrid and Noranda Aluminum Inc. work together to clinch a deal that would bring the aluminum smelter to New Madrid, Mo.

“The decade of the ’70s was a most difficult period for the electric utility industry,” General Manager Gerry Diddle wrote in the 1979 Annual Report. “It was replete with a multitude of new and changing government regulations, increasing inflation and high interest costs.”

It was also a time of tremendous growth in the use of electric energy by member systems. Kilowatt-hour sales increased 236 percent and kilowatt-hour demand increased 220 percent, Diddle said.

1970 - Associated Electric begins serving the largest single industrial load in the state, Noranda Aluminum Inc., which it serves for the next 33 years.

1974 - Associated Electric agrees to become a partner in the Black Fox Nuclear Project, which was later terminated.

1979 - Associated Electric negotiates with REA for the largest loan guarantee in the history of the rural electrification program: $1.4 billion to pay for Thomas Hill Unit 3; Black Fox Nuclear Project; new mining operations; and to offset double-digit interest rates in the late 1970s.

Expansion at Thomas Hill Energy Center dominated the scene during the 1980s as Associated Electric brought on line its fifth generating unit and modernized a newly purchased coal mine.

Construction efforts during 1980 were the largest in Associated Electric's operating history. Total utility plant (fixed assets including the power plants, transmission facilities and Headquarters, but excluding the mine) increased $260 million and represented a greater investment in new facilities than Associated Electric made in its first 14 years of operating history. The majority of those funds were expended in construction of the 670-megawatt Thomas Hill Unit 3. The final cost of the unit was estimated at $490 million.

Competition became the watchword of the 1990s as it pervaded almost all American industries. Bankers to bakers found “downsizing” or “restructuring” a means to become more efficient and competitive.

The electric utility industry was no different. News of budget cuts, layoffs and mergers dominated industry reports. Even rural electric cooperatives, once insulated from such pressures, felt the threat of competition. Strengthening its competitive position became a priority for Associated Electric Cooperative.

1995, December - The conversion to low-sulfur coal at both Thomas Hill and New Madrid power plants is completed, reducing emissions of sulfur dioxide 90 percent and allowing Associated Electric to implement an average overall rate reduction of 17 percent. Associated Electric’s rates for wholesale electricity rank as second lowest in the nation.

2003, December - Associated Electric’s board of directors approves a rate plan after engaging in a yearlong process of informing and listening to member systems. The plan includes a wholesale power supply rate increase in 2006 – Associated’s first wholesale rate increase in 20 years – that will help the cooperative meet a projected $1.7 billion in capital costs for new generation and environmental controls on existing coal-based generation. More rate increases are projected.

2004, December - Associated Electric completes mine amortization of $342 million in costs 11 years ahead of schedule – further strengthening the cooperative’s competitive position. Associated Electric closed its Missouri mine in 1993 and converted its coal-based units to burn low-sulfur coal in 1994. This conversion allowed the cooperative to reduce sulfur dioxide emissions and comply with the 1990 Amendments to the Clean Air Act.

2005, April 1 - Associated Electric announces it is proceeding with plans to build a coal-based generating plant to meet members’ growing energy needs. Carroll County is the proposed site, along with Holt County as an alternative location.

2007, March - Praised for its bold leadership in renewable energy development in Missouri, Associated Electric is awarded “2006 Wind Co-op of the Year” by the U.S. Department of Energy in partnership with the National Rural Electric Cooperative Association and Cooperative Research Network.

2007, May 2 - Associated Electric and its Thomas Hill Energy Center receive the 2007 Kenes C. Bowling National Mine Reclamation Award in the coal category for reclamation of the Bee Veer Mine in Macon County, Mo.

2007, Sept. 17 - About 475 member-owners, state and federal legislators and other officials attend dedication of Bluegrass Ridge Wind Farm, Missouri’s first utility-scale wind farm. The project is made possible due to Associated Electric’s agreement to purchase all power produced by the wind farm for the next 20 years, its interconnected transmisson system and its alliance with John Deere Wind Energy and Wind Capital Group.

2007, Sept. 20 - U.S. Department of Interior Office of Surface Mining presents its highest award to Associated Electric for its innovative reclamation of the Bee Veer Mine in Macon County, Mo.

2008, Feb. 29 - Associated Electric’s board of directors decides to delay indefinitely plans to build a 660-MW coal plant near Norborne, Mo., in Carroll County, citing increasing costs of building such a facility and the uncertainties about carbon regulations.

2011, June - Chouteau 2, a 540-megawatt, combined-cycle natural gas unit in Pryor, Okla., goes online on schedule and under budget. Construction of the power plant began in 2009, using new, stored still-in-the-box components that were purchased by Associated Electric in 2006.

As Associated Electric celebrates 50 years of successfully tackling many challenges, it looks forward as a well-positioned generation and transmission cooperative with generation capacity, financial strength and flexibility and the support of a cohesive three-tiered system.

Associated Electric celebrated its 50th anniversary in 2011. The book “Tiers of Trust" is a sequel to "Win-Win," the first informal history of Associated outlining its first 35 years from 1961 to 1996. "Tiers of Trust" is a continuation of that history from 1996 to 2011 and recognizes the cooperative's dedication to its members for 50 years. Select the book you want to read and enjoy! 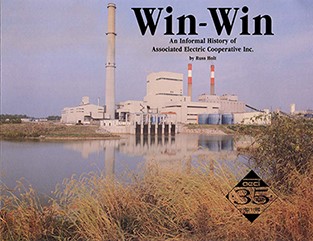 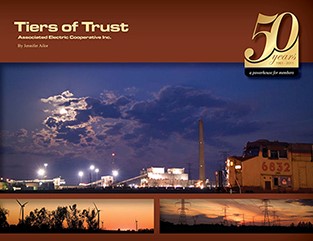 Join the team that powers up Missouri, Oklahoma and Iowa.